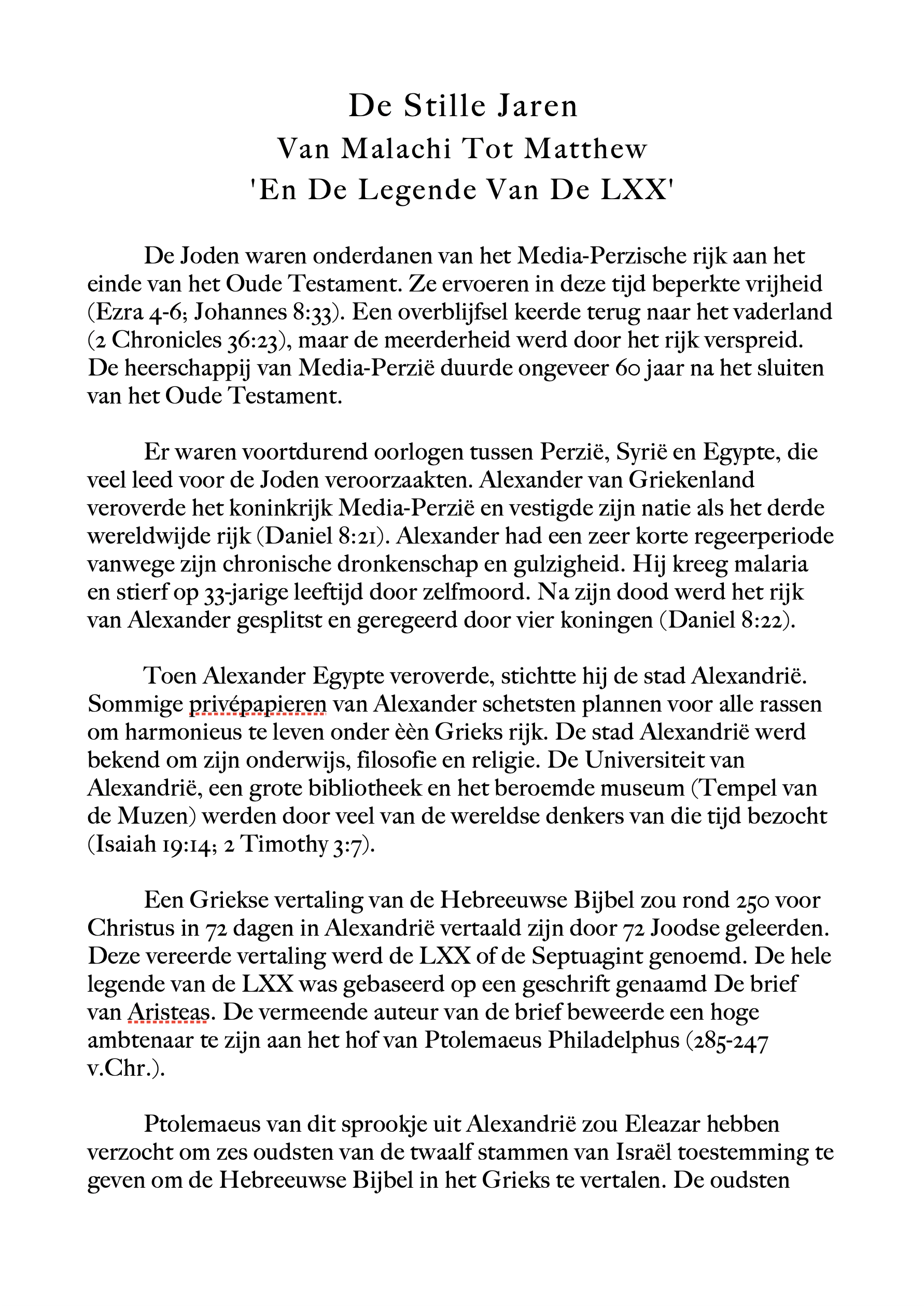 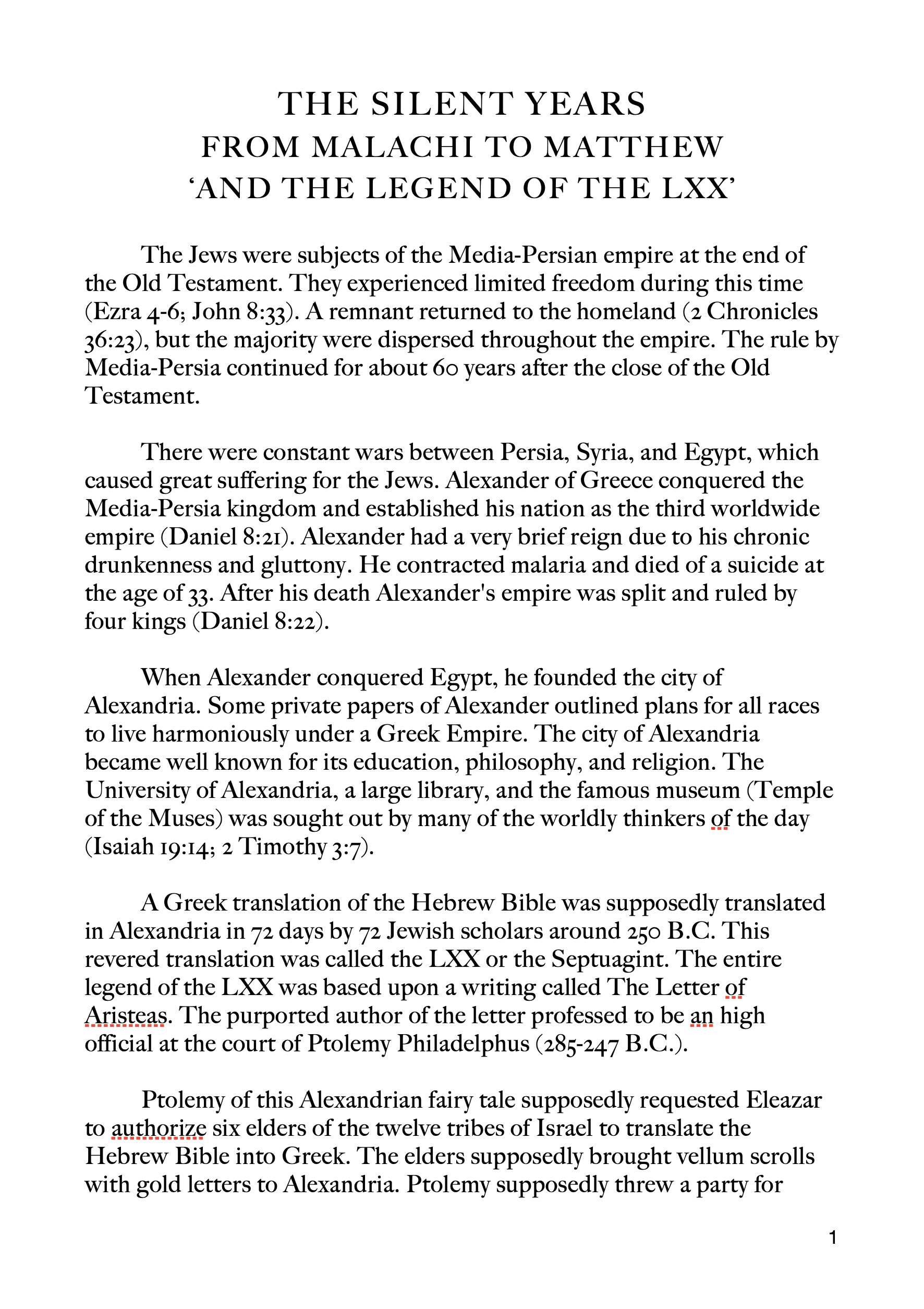 From Malachi To Matthew

‘And The Legend Of The LXX’

The Jews were subjects of the Media-Persian empire at the end of the Old Testament. They experienced limited freedom during this time (Ezra 4-6; John 8:33). A remnant returned to the homeland (2 Chronicles 36:23), but the majority were dispersed throughout the empire. The rule by Media-Persia continued for about 60 years after the close of the Old Testament.

There were constant wars between Persia, Syria, and Egypt, which caused great suffering for the Jews. Alexander of Greece conquered the Media-Persia kingdom and established his nation as the third worldwide empire (Daniel 8:21). Alexander had a very brief reign due to his chronic drunkenness and gluttony. He contracted malaria and died of a suicide at the age of 33. After his death Alexander’s empire was split and ruled by four kings (Daniel 8:22).

When Alexander conquered Egypt, he founded the city of Alexandria. Some private papers of Alexander outlined plans for all races to live harmoniously under a Greek Empire. The city of Alexandria became well known for its education, philosophy, and religion. The University of Alexandria, a large library, and the famous museum (Temple of the Muses) was sought out by many of the worldly thinkers of the day (Isaiah 19:14; 2 Timothy 3:7).

A Greek translation of the Hebrew Bible was supposedly translated in Alexandria in 72 days by 72 Jewish scholars around 250 B.C. This revered translation was called the LXX or the Septuagint. The entire legend of the LXX was based upon a writing called The Letter of Aristeas. The purported author of the letter professed to be an high official at the court of Ptolemy Philadelphus (285-247 B.C.).

Ptolemy of this Alexandrian fairy tale supposedly requested Eleazar to authorize six elders of the twelve tribes of Israel to translate the Hebrew Bible into Greek. The elders supposedly brought vellum scrolls with gold letters to Alexandria. Ptolemy supposedly threw a party for seven days and quizzed each translator about Greek philosophy (Colossians 2:8). According to the letter Ptolemy did not ask one question about the Bible or Hebrew and Greek grammar. This masterpiece from Alexandria supposedly became the elite translation that was quoted by the Lord Jesus and His Apostles.

Some spurious writings were written between 190 B.C. and 90 A.D. and these writings are known as the Apocrypha. There is much disagreement among scholars as to the inspiration of these Apocryphal books. These writings were not accepted as Scripture by the Lord Jesus, faithful Jews, and Christians (Luke 24:44-45). According to The International Standard Bible Encyclopedia the Apocryphal books include Baruch (165 B.C.-70 A.D.), Bel and the Dragon (160 B.C.), 1 Esdras (190 B.C.), 2 Esdras (90 A.D.), Ecclesiasticus or Sirach (150 B.C.), the Wisdom of Solomon (120-100 B.C.), Judith (150 B.C.), Susanna (90 B.C.), Tobit (160 B.C.), 1 Maccabees (135-63 B.C.), and 2 Maccabees (40 B.C.). Many of these Apocryphal books miraculously appeared in the LXX before they were supposedly written because the LXX has the Apocrypha dispersed within the Greek translation of the Hebrew Bible.

Simpletons believe the fairy tale of Alexandria by faith with no evidence of any B.C. LXX (Prov. 14:15). Prudent students research further (Prov. 14:18; Acts 17:11; 1 Thess. 5:21). The Lord God did not authorize any inspired writings during the silent years. Common sense and Bible reading aid in understanding the questionable story of the LXX. The legend of the LXX wavers between 70 or 72 scholars. If six scholars from each of the twelve tribes of Israel were involved, 66 men were apostates because God entrusted the Levites with the preservation of the Scriptures (Deut. 33:8-11; Ezra 7:6-10; Mal. 2:1-8). It makes no sense that an Orthodox Jew would desire to change his Hebrew Bible into Greek. The Jews adamantly think Gentiles are dogs (Matt. 15:21-28; Luke 4:23-30; Acts 22:22).

The Septuagint most likely stemmed from the first theological school of Christendom that was founded in Alexandria. The first head of this school was Pantaenus in 180 A.D. Clement was the second head in 202, but the school reached its zenith under the tutelage of Origenes Adamantius in 232. Origen is the hero of all Alexandrian scholars. All modern scholars give Origen the credit for being the first Bible critic. Origen was obsessed with philosophy and he never believed the Bible literally.

The crowning work of Origen was called the Hexapla. The Hexapla was a book containing six versions of the Old Testament, which were laid out in six vertical columns. An Hebrew Old Testament was the first column. The second column was a Greek transliteration of the Old Testament. Aquilla wrote a translation for the third column, Symmachus wrote one for the fourth column, Origen wrote one for the fifth column, and Theodotian wrote a translation for the final column. The fifth column most likely was the Septuagint, which was originally penned by Origen himself. It contained the Apocrypha as a part of the Old Testament. This also appears to be one of the favorite manuscripts of Alexandrian scholars. It is called Codex Vaticanus or manuscript B. Alexandrian scholars are also mystified with Codex Siniaticus and Codex Alexandrinus. The evidence implies that Origen wrote the mysterious Septuagint around 250 A.D. rather than the fairy tale of The Letter of Aristeas.

Adamant scholars of Alexandria will point out that the translators of the King James Bible included the Apocrypha in the early editions of their translation. This is true, but the honest translators placed the spurious writings of the Apocrypha BETWEEN the Testaments with the reasons why they did not believe the Apocryphal books were inspired. The Septuagint and the corrupt Alexandrian manuscripts have the perverted Apocryphal books dispersed within the Old Testament.

The beloved translators of the Authorized King James Bible gave seven reasons why the Apocrypha books were not inspired. None of the books were written in Hebrew. No writer claimed to be inspired. The Jewish church and the Lord Jesus Christ never acknowledged the Apocryphal books as sacred Scriptures. They were not allowed among the sacred books in the first four centuries of the Christian church because they contained contradictions with themselves and the true Scriptures. In the two books of Maccabees, Antiochus Epiphanes is made to die three different ways in three different places. The Apocryphal books teach false doctrines; such as, prayers for the dead and sinless perfection. The Apocrypha also teaches immoral practices of lying, suicide, assassination, and magical incantations.

An honest and prudent Bible student studies about the dangers of Alexandria, Egypt and the blessings of Antioch of Syria in the final authority for all matters of faith and practice to obtain sound doctrine. Egypt is called the house of bondage ten times in the Scriptures. The first occurrence of the word Alexandria establishes it as a place that contends with a Spirit-filled deacon from Antioch (Acts 6:5, 9 — This is found in all Bibles.). Antioch is the first place the disciples were called Christians (Acts 11:26 — This is found in all Bibles also.). The Scripture bears witness to Antioch as the chosen place of God during the time of the church.

Since the word of God is not bound any honest and sincere use of the text in this work is granted. No monetary gain for use is granted. Dishonest use is forbidden and unlawful.

2 Timothy 2:15 Study to shew thyself approved unto God, a workman that needeth not to be ashamed, rightly dividing the word of truth.